Coming up with recipes and menus is often about defining a moment rather than a taste.  Yes, I’m trying to make a dish that tastes good, but I’m also trying to distill the essence of a particular moment into a flavor – communicate the breadth of all the feels I have but am too emotionally stunted to express.  I’m like the Taylor Swift of food; if I feel it, I’m baking it.  And feeding it to you.

I’m literally shoving my emotional issues down your throat.

But what happens when the anxiety/fear/confusion is more than cookie dough alone can handle?

What happens when you combine shakin it and bakin it?  This panda-faced bacardi cola cake made for my friend Soy’s birthday in honor of our trip to Ibiza.

Party Panda -/ˈpärdē pandə/ noun 1. what happens when a normally reserved person meets a good dj;  2. this lady in this hat. 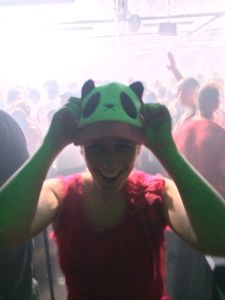 Hell, sometimes it doesn’t even need to be good, just catchy.  Like the aptly named Shake It Off by Ms Swift, in which Taylor rocks some adorably uncoordinated dance moves.  She’s awkward, but I just want to virtually fistbump her for owning it and the metaphor by literally just shaking it. Since I’m closer to one of those dancing flower toys from the 90s that moved on command to audio than Beyonce, I’m all for Taylor’s shaking.  Sure, I got one or two moves but for the most part, I’m just trying to shake it off.

Yesterday was The Worst.  Yesterday was 10 hours of sinking pit of my stomach, vomit inducing anxiety, everything-that-could-go-wrong-did-go-wrong and paralyzing insecurity as a result. The only good thing about yesterday?  I could falsely blame the rain for my runny mascara.

I didn’t have time to bake it, so I went home, cranked up some music and shaked it.  And you know what?  It did not solve a single problem.

Clients are still screaming, deadlines are still unmet, bosses are still bossing, my fear of rejection still has me trapped in emotional purgatory.  But for three minutes and 28 seconds, none of that matters – the bass is in my heartbeat and every bad thing melts away like ice cubes in a bacardi-cola.

So maybe its not about substituting feelings, but defining them – cutting through all the conditionals and and what-ifs and just getting down to to that moment when you just shake it all off and feel with clarity.

Eating some cake doesn’t hurt either.

For the frosting (or use two cans of store-bought vanilla or cream cheese frosting):

In a large bowl, prepare batter according to package directions substituting the 1 1/4 cup water with the Barcardi, cola, and lime zest.  Mix well.  Divide batter between cake tins.  Bake for 26-31 minutes until wooden skewer comes out clean in the center.

Lets cakes cool for about 15 minutes.  Loosen edges with a knife and turn out onto wire racks to complete cooling. Remove parchment.  When cakes are entirely cool, carefully cut each cake into two layers with a large serrated knife, using an even sawing motion.

Make the glaze. In a sauce pan over medium high heat, whisk together sugar, lime and cola.  Bring to a boil and simmer until sugar dissolves and mixture thickens slightly.  Remove from heat and stir in Bacardi.

Make the frosting.  With an electric mixer, beat butter until light and fluffy.  Add sugar, one cup at a time, until well combined.  Beat in vanilla and Bacardi.

On a serving plate, place first layer.  Spoon about 1/3 of the glaze over it and spread a thin amount of frosting.  Place the next layer of cake on top.  Repeat with next three layers.  Frost cake with a crumb coat.  Chill cake to set frosting and glaze, about 15-30 minutes.

Reserve about 2/3 cup frosting and dye with black food coloring.  Frost cake all over with vanilla frosting.  Return to fridge.  Color a small ball of marzipan with white food coloring and shape into to small disks for whites of eyes.  Color a large ball of marzipan with black food coloring and shape nose, two pupils and two ears.  Using an toothpick or knife edge, outline panda eyes.   Insert ears into side of cake with toothpicks. Place black frosting in a pastry bag fitted with a multi-tip. Fill outlined eyes area and cover ears with “fur”.  Place nose, whites of eyes and pupils.