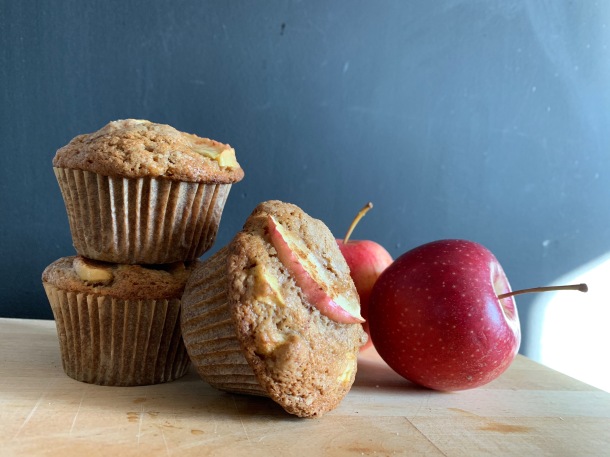 I am a garbage person.  Also: apple muffins.

In case any of you have ever harbored romantic notions about what it must be like to live with me, let this confirm that it would be terrible. I have weird hangups about the smell of damp towels.  I require kitchen items to be meticulously placed in specific locations. I leave craft projects all over the floor.  I am really not a morning person.

I usually combat this last feature by not encountering anyone in the morning.  When in a relationship, I aim to wake up before my partner and give my brain about an hour to defog, stare at the ceiling, read the internet, shower, creep out to work before they open their eyes, whatever, until the garbage monster that lives in my tiny black heart dissolves and is replace with something closer to human.  Catch me before this, and I am a trash person who is really upset about misplaced kitchen items.

One boyfriend used to bring me espresso in the shower to speed the process.  Another would snooze the alarm for an hour until we both were ready for morning pleasantries.  I briefly had team assistant, who would, unbidden, leave a latte on my desk before I arrived in the morning, as if to say, “you stay in your office until you’re ready to come out and play nice with the rest of the kids.”

So to match my garbage personality, I made muffins this morning from things that needed to be cleaned out of the fridge, based somewhat on a Martha Stewart recipe for apple muffins.

Preheat oven to 375 degrees.  Line standard cupcake tin with papers.  The cabinet of baking supplies mocks you for not living up to your potential.

Open fridge, see three small apples you bought two weeks ago and promptly forgot about in your crisper.  They seem sad and neglected, like your commitment to eating healthier. Cut twelve thin slices with the peel on (about half an apple) and set aside.  Peel, core, and dice the remaining apples, (yields about one generous cup) toss into a large mixing bowl and combine with:

Melt 8 Tbs (1 stick) of unsalted butter in a medium size pot over low heat.  Remove from stove and know that you should whisk in buttermilk but you can’t because who just keeps buttermilk on hand?  Instead, add ⅔ cup sour cream, (leftover from last week’s late night taco binge, careful to scoop around the salsa-y bits) watered down with 2-3 Tbs calvados. (Calvados reminds you of your dead father; it tastes like tears but it seems wasteful to throw it away. Also it enhances the apple flavor.). Mix in 2 eggs and 1 teas of vanilla extract.

Fold wet ingredients into dry ingredients until just mixed.  Divide evenly into tins. Top with apple slice and sprinkle with sugar.  Lick batter off of spatula. Realize that you have your retainers in and now they’re gummed up with batter and you’re an adult with braces and you’ll die alone except for maybe your roommate but you’ve just pissed her off so wait, yeah, you’re dying alone.  You don’t even have a cat. You will soon have muffins, however.

Bake for 18-22 minutes until a wooden skewer comes out clean.  Send nonsensical rant to the group chat about something you read on the internet.  Wait for affirmation that you are totally normal and everyone else is terrible. Remove muffins from tins and let cool on a rack.  Feel odd sense of accomplishment that you cleaned out the fridge and also have muffins. Store in an airtight container for up to three days or share to convince people you are not a monster.

One thought on “trash muffins”