If I bake a boozy cake with cupcake vodka, is it a vodka cupcake within a cupcake?  Or just inside out?

Cupcake.  Vodka.  I’ve been pouring vodka into cupcakes for some time now, but these brilliant 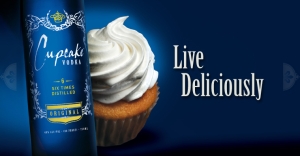 folks over at Cupcake Vineyards have taken it to a whole new level.  The cupcake is inside the vodka!  Well, its more like its infused, or flavored but I like to believe that them merely reduced the cupcake down to the molecular level of deliciousness and through forced covalent bonding and redefining the Heisenberg uncertainty principle with Schrodinger’s lolcat, have made a delightful Frankenstein’s monster.  Or they have a shrink ray that miniaturized the cupcakes to the size of sugar crystals and just dissolved them in the juice of potatoes.

Either way a cupcake made with this, so meta.