I don’t like Valentine’s Day. But admittedly, I’m a Grinch when it comes to all holidays. I try to avoid them in general. In college, V-Day was about a production of the Vagina Monologues, cookies shaped like lady parts and ending violence against women. Later it was replaced with large gatherings food and friendship sans Hallmark associations. This year I’ll be 100 ft underwater off the coast of South America trying not to get eaten by a shark.

So for those people, I throw on the cloak of delirious creativity. I’ve been thinking a lot about creating an aphrodisiac cupcake. Giddy off the fumes of freshly unpacked neoprene and grad school readings I pour some left over tinto de toro (Moore Bros’ has a delicious one…. ) into a batch of chocolate cupcakes. Wait…something else. Chilies are considered an aphrodisiac; I toss in some cayenne.

19 to 22 minutes later, one eyebrow arched in skepticism – nom! I ponder the flavor combination in my mouth…oddly delightful. But it needs…frosting.

Back to the laboratory! I conjure a spicy ganache but the addition of red wine makes it break. Curses! Reheating the chocolaty goodness it dawns on me…cayenne gets spicier with the application of heat. Can these be saved?

Heart thumping, sweat beading on my brow I call for back up, Sarah Super-Taster arrives. She loves chocolate chili combinations, but will this be enough? Will it be too much? She takes a bite.

I’d say tune in next week, but well, after a few tweaks, I can safely say the real hero of the day was…the recipe below. 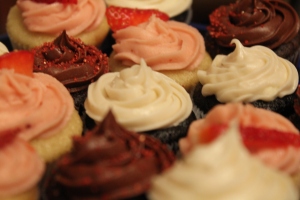 In a large bowl, prepare batter according to package directions substituting the 1 1/4 cup water with red wine.  Add cayenne.  Mix well.  Pour into cupcake tins, filling about 2/3 of the way,  and place in oven.  Bake for 19-22 minutes until cupcakes spring back when touched.

MEANWHILE, on the other side of town….prepare frosting.  Using a double boiler melt chocolate and heavy cream together.  Once melted, stir in cayenne, red wine, and vanilla extract.  Chocolate should be smooth and glossy.  Remove from heat and let cool to room temperature.  You can refrigerate to speed up the process.  Using an electric hand mixer, mix frosting in a high sided bowl until fluffy.  Add confectioners sugar, more if necessary to reach desired consistency.

Let cupcakes cool completely before frosting.  Spread a slightly thinner coat to avoid over spicy cupcakes.  Can be refrigerated up to 3 days.  by Ellie