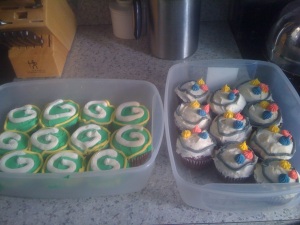 Packers and Steelers cupcakes face off

The Superbowl is one of my favorite holidays, after St. Patrick’s Day, Halloween, and the Fourth of July (which I love more for the fireworks and cookouts than the patriotism, I think).  It’s also a great excuse to make boozy cupcakes and feed them to friends.  Game day cupcakes should definitely be beer-based, so I went with a chocolate cake made with a stout beer.  (Honestly, I used Guinness, even though I should have used an American stout.  Oh well.)  I decided to make team  cupcakes and give each its own boozy frosting flavor.  Then I tried to get fancy with the frosting… as you can see, my piping skills are still developing.

Preheat oven to 350. Combine ingredients in a large mixing bowl.  Whisk until batter is lump-free.  Poor batter into paper-lined cupcake tins.  The bubbles in the batter will make it rise just a little more, so do not overfill!  Aim to make each liner ⅔ full.

Combine butter, vanilla, and ginger liqueur in a large mixing bowl.  Beat ingredients together, gradually adding remaining sugar.  Reserve ⅔ of the frosting, then separate the other third into 4 equal parts (twelfths!)  Dye one red, one yellow, one blue, and one gray.  (To make gray frosting combine a few drops red, blue, and green food coloring.)  Frost to resemble the Steelers’ logo.

When I brought these cupcakes to a party, there was some debate over whether you wanted to eat the cupcake of the team that you were rooting for (in celebration) or of their opponent (as in, you’ll devour the competition).  In any case, there were a lot more Steelers cupcakes left over at the game’s end.  by Erin

One thought on “Game Day Cupcakes”